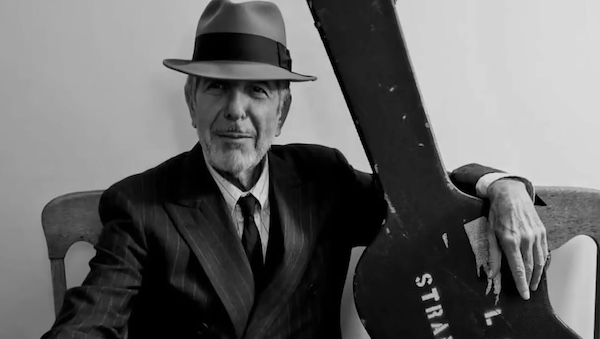 Online ticket sales end at 5:00 PM on Friday. Remaining tickets will be sold at the door when doors open at 7:30.

This feature-length documentary weaves together three creative strands: The songwriter and his times; the song’s dramatic journey from record label reject to chart-topping hit; and moving testimonies from major recording artists for whom “Hallelujah” has become a personal touchstone. Approved for production by Leonard Cohen just before his 80th birthday in 2014, the film accesses a wealth of never-before-seen archival materials from the Cohen Trust including Cohen’s personal notebooks, journals and photographs, performance footage, and extremely rare audio recordings and interviews. USA, 2021, 118 minutes, rated PG-1

“A source of illumination for both die-hard and casual fans, and even to people who love Cohen’s most famous song without being aware that he wrote it.” “A fascinating study in the mechanics and metaphysics of pop-culture memory.” Critic’s Pick – A.O. Scott, The New York Times

“Does the film explain “Hallelujah?” Of course not – the song stubbornly resists explanation, because it’s so many different things and because there’s a beautiful mystery at its heart. “Hallelujah: Leonard Cohen, A Journey, A Song” is smart enough to embrace that mystery and that beauty, and to know that there’s far more to Cohen than can be summed up in four, or seven, or even 150 verses.” – The Wrap

“It’s a rare song that deserves its own book, but Hallelujah is one of them. The story is a doozy.” – The Globe and Mail