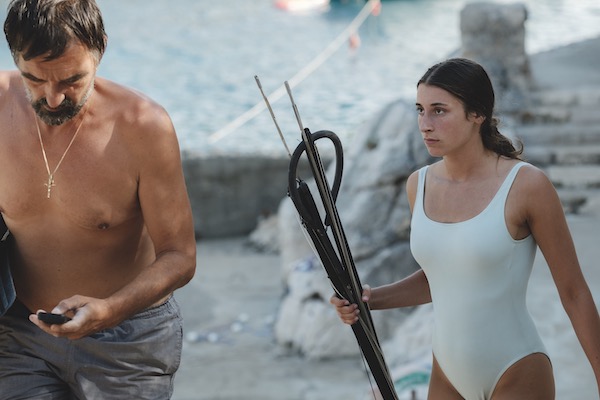 MURINA, screening at The Nyack Center

Online sales will end at 5:00 PM today, but additional tickets will be available at the door.

On a remote island along Croatia’s Adriatic coast, 17-year-old Julija spends her days diving for eel with her domineering father Ante and watching other teens party on a nearby yacht. Julija bristles at Ante’s heavy handed cruelty and resents her mother Nela’s passivity. She longs for independence but is unsure how to achieve it, until the arrival of the rich and mysterious Javier seems to offer a way out. Javier is considering buying Ante’s land to build a resort, which would allow the family to escape their island isolation. Javier flirts shamelessly with Nela and Julija, setting off a subtle battle of hypermasculine one-upmanship. Flattered by Javier’s praise and stories of traveling the world, Julija sees him as the solution to all her problems. But does his affection portend freedom, or something else? Croatia, 2021, 96 minutes, in Croatian and English, with English subtitles, unrated.

Discussion after the film to be announced.

“A slow burn of a movie, one that doesn’t end in a detonation but with an enigma. Nevertheless, it’s one of the more coherent and satisfying narrative releases of the year.” – rogerebert.com

A gripping power struggle, from first moment to last. – The Hollywood Reporter

“Moody and mysterious. A taut psychodrama that makes subtle but impactful statements about misogyny and personal choice.” – Little White Lies

“A vivid picture of a troubled paradise.” – The Wrap

“Murina is an intoxicating deep dive into oppression, the taste of freedom, and that first glimpse of understanding how complex the adult world can be, all in the name of discovering oneself.” – Alliance of Women Film Journalists