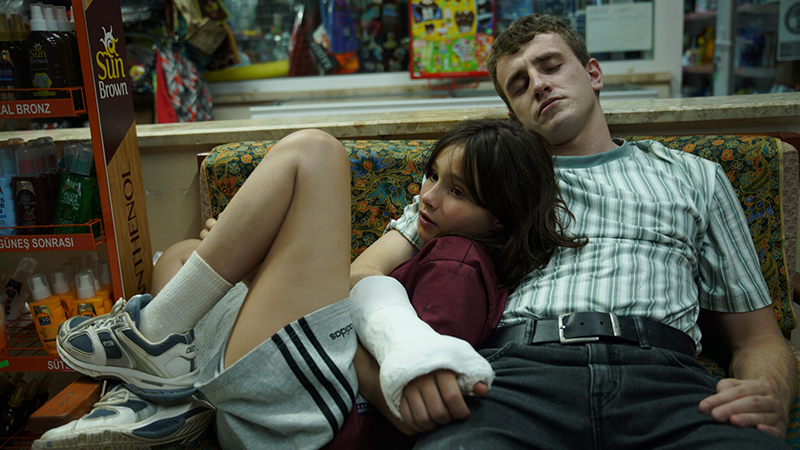 ONLINE TICKET SALES END AT 5:00. Remaining tickets will be sold at the door starting at 7:30. At a fading vacation resort, an 11-year-old treasures rare time together with her loving and idealistic father. As a world of adolescence creeps into view, beyond her eye her father struggles under the weight of life outside of fatherhood. Twenty years later, Sophie’s tender recollections of joy and private melancholy on this final holiday together become a powerful and heartrending portrait of their relationship, as memories real and imagined fill in the gaps and she tries to reconcile the father she knew with the man she didn’t. She watches the events of that holiday replay through Polaroids, camcorder footage, and the fog of her own adult life, yearning to form a true picture from the broken puzzle. The outlines are clear: a too-young, emotionally struggling father full of love and playfulness but also haunting sadness; and a girl on the cusp of adolescence, sensing she is changing, but still just childlike enough to wish to be her father’s friend. Yet inside those lines, everything Sophie can’t know about that trip, about Calum, swirls and spins, defying clarity. For no matter how heartstoppingly narrow the gap between lost time and her perpetual longing, Sophie cannot cross it. UK/USA, 2022, 102 minutes, Rated R for some bad words and tough situations.

Wearing a mask at Aftersun is required. The Covid-19 Community Level in Rockland County is now High. Because many members of our audience are over 65 and at high risk of serious illness, we are requiring everyone to wear a mask at the screening of Aftersun. We know this is uncomfortable for many of you, but we ask for your participation so that everyone can enjoy the film while feeling safe and secure.

After the film, stay for a discussion to be led by two time Academy Award nominee (once for Picture, once for Art Direction), Kristi Zea.

“A father-daughter vacation in a resort town on the Turkish coast, with snorkeling excursions, hotel buffets and lazy hours by the pool — that ends in tears. Your tears.” (NYT Critic’s Pick) – A.O. Scott, The New York Times

“I’ve been thinking about “Aftersun” since its debut at the Cannes Film Festival in May. Now it’s in theaters where no excuses will be accepted for you missing it. This is the best film of the year by a first time writer-director.” – Peter Travers, ABC News

“The best film of the year so far. You won’t walk away the same person.” – The Wrap

“With “Aftersun,” every moment, every snippet of dialogue, every detail down to the smallest role or the tiniest detail in the background feels like a vibrant slice of real life. From the opening scene that is filtered through the hazy, grainy lens of a camcorder (remember camcorders?) to the closing credits, this feels real — and yet somewhat dreamlike throughout, like an extended memory.” – Richard Roeper, Chicago Sun-Times

“Though any honest summation can’t do it justice, Charlotte Wells’s tender feature debut is the kind of revelation that movie fans dream of finding: not a wow so much as a guaranteed piece of emotional ravishment. Aftersun aches with a feeling that’s hard to pin down, but when you finally do, it clicks together like nothing else you’ll see this year.” ­– Joshua Rothcamp, Entertainment Weekly