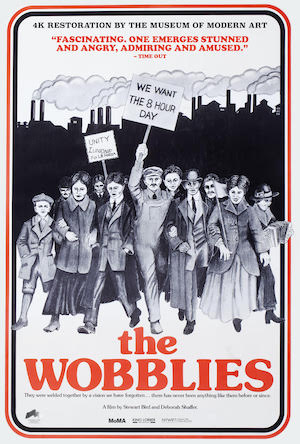 THE WOBBLIES, streaming from September 1 through Sept 9

“Solidarity! All for One and One for All!” Founded in Chicago in 1905, the Industrial Workers of the World (IWW) took to organizing unskilled workers into one big union and changed the course of American history. This compelling documentary of the IWW (or “The Wobblies” as they were known) tells the story of workers in factories, sawmills, wheat fields, forests, mines and on the docks as they organize and demand better wages, healthcare, overtime pay and safer working conditions. In some respects, men and women, Black and white, skilled and unskilled workers joining a union and speaking their minds seems so long ago, but in other ways, the film mirrors today’s headlines, depicting a nation torn by corporate greed. 1979, USA, 89 minutes, documentary

Filmmakers Deborah Shaffer and Stewart Bird weave history, archival film footage, interviews with former workers (now in their 80s and 90s), cartoons, original art, and classic Wobbly songs (many written by Joe Hill) to pay tribute to the legacy of these rebels who paved the way and risked their lives for the many of the rights that we still have today.

Restored by the Museum of Modern Art and recently inducted into the National Film Registry of the Library of Congress.

Watch the 16 minute story about the recent re-release of The Wobblies on Democracy Now, featuring Co-Director Deborah Shaffer, recorded 4/20/2022, HERE.

Watch The Wobblies on our new Rivertown Film Virtual Theater on Eventive. With our own Virtual Theater,  seniors receive a $2 discount and members of Rivertown Film will receive a $4 discount for this film. If you have already used Eventive and have a password, please continue to use it. If you can’t remember your password, use the “reset password” function and create a new one, then write it down for future use! When you purchase your ticket in advance you will have 3 days to “unlock” your viewing once the film is available on September 1 (you’ll receive a reminder email). When you unlock the film and begin to watch, you will have 3 more days to finish watching it. If you have any problems, please use the “Need Help?” link at the top of the page, which connects to a helpful live chat.  For information on viewing on a variety of devises or if you would like to connect your devise to a smart TV with Cromecast, AirPlay, Apple TV apps, Roku, or with an HDMI cable, you’ll find instructions (and other information) on this FAQ page. And if you are worried that your devise will be incompatible with this platform and that confirmation emails won’t go to your spam folder, test it out HERE.

“Harmonizing and hell-raising, rhythm and rebellion, poetry and politics, singing and striking. The Industrial Workers of the World—the shock troops of the early-20th-century labor movement—virtually invented the protest song for the modern age. The goal of the Industrial Workers of the World—or Wobblies, as members were widely known—was revolution, not just winning strikes. Unlike other unions of the time, it accepted all workers as members: Black people, women, unskilled laborers, sex workers, immigrants of every race and creed. It sought to forge ‘one big union’ of the entire global working class and used direct action, sabotage and the power of song in class war against the ruling class. Its reputation as a kick-ass union fueled by kick-ass songs remains the stuff of legend.” – Tom Morello (Rage Against the Machine), The New York Times

“A fascinating and often moving compilation of newsreel, photographs, and those amazing songs. One emerges stunned and angry, admiring and amused.” – Time Out

“The Wobblies is a history of the IWW, researched lovingly and corroborated by the reminiscences of some of the union’s former members, who are now in their 80’s and 90’s. When the facts are presented as fully as they have been here, the feelings that accompanied them aren’t difficult to imagine. – The New York Times

“Conveys the conviction and strength of these union pioneers with straightforward grace.” – Michael Blowen, The Boston Globe

“Iconic. Innovative. Eerily echoing current times. Replete with gorgeous archival footage, the film pays tribute to American workers who took the ideals of equality and free speech seriously enough to put their lives on the line for them. A joyous chronicle.” – New York Women in Film & Television