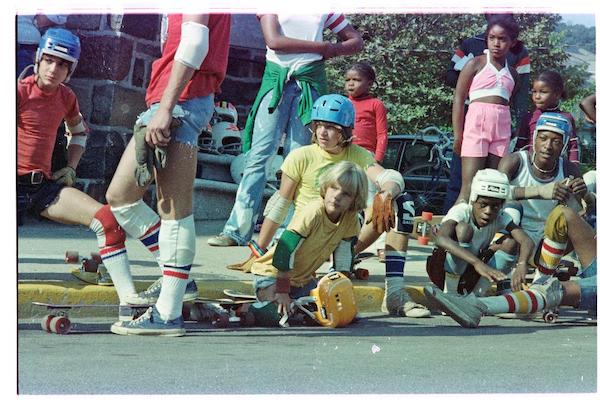 Nyack Village Trustee Donna Lightfoot Cooper will welcome the audience and introduce filmmaker Charlie Samuels  and other Wizards who are present before the film.

Playing for free in Memorial Park, next to the river and under the stars, starting at 8:00 PM on Friday, August 19. Rain date, Saturday, August 20. Bring your own blanket, or better yet, lawn chairs.

Presented by Rivertown Film with VIRGIN BLACKTOP and Nyack Film Festival, with thanks to important funding from friends of Visit Nyack.

Our Community Partners for this free screening include: The Village of Nyack, Nyack Chamber of Commerce, Visit Nyack, ACADA, The Nyack Center, Nyack Merchants United, and Nyack NAACP.

A discussion with filmmaker Charlie Samuels and members of the Wizards will be held on Zoom, on Tuesday, August 23, at 6:00 PM. Registration (name and email) is required HERE

“Virgin Blacktop explores the lives of Samuels’ diverse skater crew that met in Rockland in 1977. ‘It’s been almost 40 years since we named ourselves the Wizards – we placed in State and National competitions and one of us went on to be the first pro skater in New York City. Now we are fathers and husbands and our lives have spun off in different directions, but we’ve stayed passionate about the sub-culture of skating.’” – Bill Batson, Nyack News and Views (2018)

“The footage of The Wizards at exhibitions and competitions is a time capsule of long-lost Rockland:  There they are in front of Bamberger’s in Paramus, New Jersey; at the Nanuet Theater-Go-Round, riding up a wooden ramp they had transported to the site on the roof of a car; slaloming down the hill on Nyack’s Remsen Street, with the Tappan Zee Playhouse as a backdrop. When they formed in 1977, The Wizards were: Nyack’s Kermit Taylor (who later changed his name to Jamaal Bey), Stephon White, and Umberto Brownlee; South Nyack’s Joe Humeres; Grand View’s Chris Kinzel and Jonathan Bell; Upper Grand View’s Ramsay Lewis; and Sparkill’s Samuels. Bell was 16; White and Samuels 15; Bey and Kinzel were 14; Lewis and Brownlee 12; Humeres 11. Before long, the towheaded Michael Offen, of Upper Nyack, whom Samuels used to babysit, was allowed to join. He was, Samuels says, ‘the best 7-year-old skater on the East Coast.’” – Peter D. Kramer, The Journal News (2018)